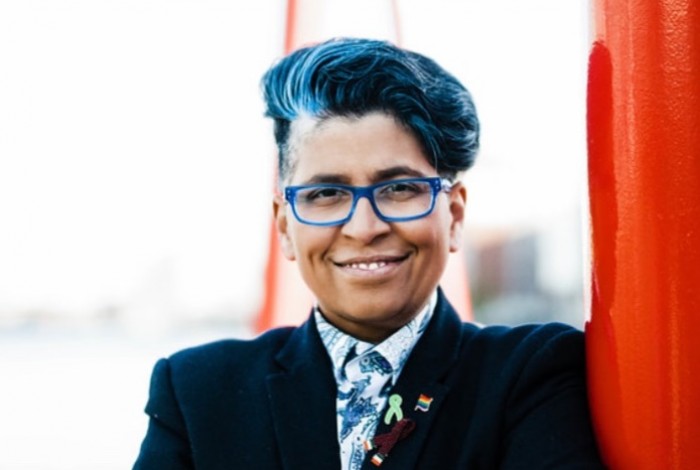 First up: Dil Wickremasinghe, an experienced journalist and social entrepreneur who founded Insight Matters, a counselling and psychotherapy service, with her wife Anne Marie Toole. For a decade she presented the weekly award winning Global Village show on Newstalk 106-108FM. In September 2017 her show was axed abruptly just two weeks after Dil publicly spoke out about a fellow presenter’s views on rape. Dil is a proud lesbian, migrant woman who cares deeply about social justice and mental health so much so that she has made it her life’s work to create awareness of these issues.

"I definitely think it should be women’s day every day! But International Women’s Day is a chance to take stock on an annual basis. It’s a reminder of the need for equal representation and to ensure women feel safe in this world.

"International Women’s Day is very special for me this year in particular because I have a seven month old daughter, which makes me even more determined to stand up for equality. Xavier was just a month old when I spoke out about sexism in Newstalk. It was because of her I felt I had to do something. She makes me feel even more that I have a responsibility for leaving the world in a better place than I found it.

"I also have a son, Phoenix, and I think it’s really important to include men and boys in the conversations. We shouldn’t just speak to girls and women on International Women’s Day. I want my son to be a feminist and contribute to building a more equal society. We need everyone to work together if we are going to achieve that goal.

"This year the theme for International Women’s Day is #pressforprogress and that’s what people need to do. I sometimes worry there is an element of complacency when it comes to female equality but we are not there yet (by far!) and we need to keep up the pressure. It’s very exciting to be alive at the moment with the #MeToo and #TimesUp global movements, which are all feeding into the equality movement. Before there was a cloud of fear which stopped women standing up and that seems to be clearing a bit now, so it’s time for action.

"I represent a wide number of communities – I am a woman, I am a migrant, I have experienced mental health difficulties and I am a member of the LGBT community. I feel a responsibility to stand up for the values I hold dear. That is one of the reasons I spoke out over the situation in Newstalk. Ultimately it cost me my job, but as a vocal feminist I couldn’t not speak up.

"Interestingly, I now don’t face any challenges because of my gender (or any other reason!) because I don’t try to make myself fit anymore. I’m making my own chances – I’m a social entrepreneur, making podcasts and running Insight Matters. I am outside the establishment and feel alien in corporate environments now. Those facing challenges because of their gender are the change-makers still working within the system. I have been that soldier and it’s exhausting because you are constantly fighting.

"When I joined Newstalk in 2008 there were no minority faces. And when I left last year there were only a couple more. Progress is so slow. I naively thought when I joined there would be more women and people from minority backgrounds as time went on, but it just hasn’t happened. I have been wondering why that is – do people think that if more people like me get jobs there will be fewer jobs for the boys? It’s such a shame because there is so much talent being lost. I can’t believe Ireland still hasn’t got it. It doesn’t matter what package things come in, it’s the quality which counts. And there’s such a lot of talent out there which is being ignored. What happened to me has such a huge chill factor for other minority voices. People will have seen what happens if you speak out and might think they should just keep their head down.

"I heard this great quote today, “Diversity is inviting someone to the party. Inclusion is inviting them to dance.” That totally sums up my experience in Newstalk. I was invited to the party, but never to dance. I never felt that sense of belonging. And this is an ongoing issue for women. Yet half the population is female. And what hope do you have if you are also from a minority group as well?!

"Ailbhe Smith is definitely a woman who inspires me. I have great respect for her work on the marriage referendum and now with Repeal the 8th. She is a living legend! Ailbhe was one of the first lesbians I met who really inspired me to become who I am.

"Another inspiration is my seven month old daughter, Xavier. I know in her mind she thinks she can do anything and that everything is possible. I see it as my role to ensure she carries this belief for as long as possible.

"But in terms of ongoing, unwavering support, the absolute wind beneath my wings is my wife Anne Marie. She had given birth a month before the Newstalk situation broke and was dealing with everything that brings. But we sat down and talked about what might happen – the worst case scenario being I might lose my job. I had doubts but she gave me permission to remain true to myself – and so I did. She was there when the worst case scenario came to pass and when I suffered from a relapse of PTSD. Anne Marie supports and inspires me every day."