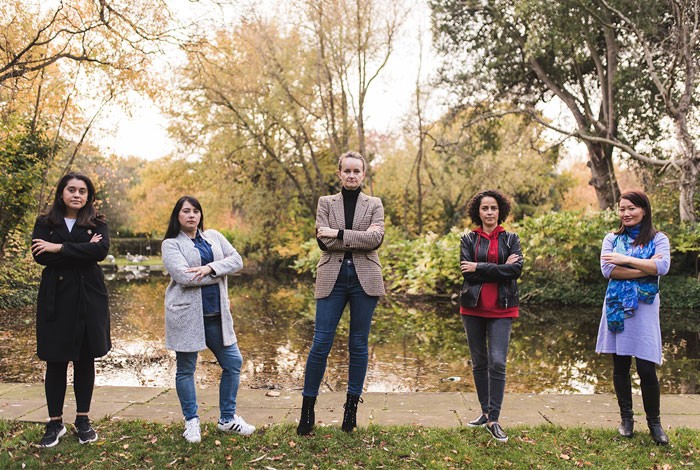 Migrant Women na hEireann, a network of women from a migrant background living in Ireland, have come together to raise awareness concerning  the lack of attention to migrant specific issues in domestic and gender based violence cases. A new social media campaign #WeAreHereToo will be launched on 25 November 2020 to highlight this issue during the 16 Days of Activism Against Gender Based-Violence. The campaign will feature testimonies and stories from migrant women about their struggles with domestic and gender based violence.

Luz Pereira, Grupo Mulheres do Brasil – Dublin (Women of Brazil) said, “We are particularly concerned with the issue of domestic and gender based violence intersecting with immigration statuses. The immigration system at times enables domestic violence and keeps women trapped in abusive relationships. We want to start and lead a conversation about the lack of inclusion of migrant specific issues in the national discourse on domestic violence and gender based violence.

"Migrant women face additional challenges in accessing support that range from language and cultural barriers, lack of information, to social isolation and issues with their right to live in Ireland should they leave an abusive partner. The Government launched a dedicated website for victims of domestic violence to respond to the increase of such cases during the pandemic. However, the website does not refer to issues specific to migrant women. We want to address the issue of lack of attention to migrant women in the national discussion and service delivery."

Phathisani Nkomo , Dignity Partnership, said “We want to reach out to fellow migrant women who experience domestic or gender based violence. We want to tell every migrant woman that is in this situation that we see you, we hear you, and you are not alone.

‘We are using the campaign to educate migrant women about different forms of domestic violence, so they can recognise it is what happens to them. We also present stories of migrant women who overcame their experience of violence and are now helping others. We want to project hope and resilience through stories of role models."

Valeria Aquino, Association of Brazilian Families in Ireland (AMBI) said "The stories represent the variety of issues that our network members are working with. However this is only a snapshot of the complex cases where migrant women are subjected to violence and find it difficult to seek support. As a network we plan to grow our membership to bring the various hidden issues affecting migrant women living in Ireland to the attention of policy makers and service provides. We will host a public webinar in December to discuss the campaign and to reach out to more migrant women groups. In the meantime, women seeking support can get information on how to get in touch with our members through the Immigrant Council website.

Visit our Gender-based violence campaign to learn more about this issue and find available supports.