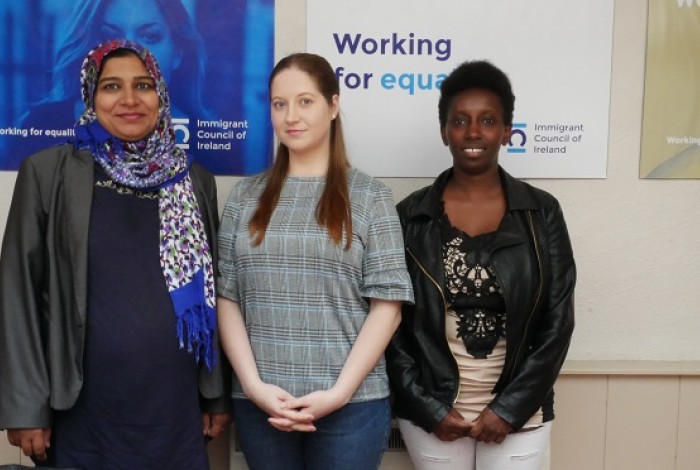 The Immigrant Council of Ireland initiated the political internship scheme in March 2018 with the aim of promoting migrant participation in local politics, including encouraging and preparing them to run for elective positions in the upcoming local elections in 2019. The internship invited members of the migrant community to volunteer to intern with local councillors to get a better sense of what the role involved.  The interns were paired with local representatives, working alongside the councillor on local issues and attending Council and community meetings.

One of the Immigrant Council’s strategic goals for 2017-21 is to help shape the narrative on migrant rights and to continue playing a leading role in supporting integration in Ireland and combatting xenophobia and racism. Promoting migrant political participation in local politics is an integral part of this goal. It is crucial for our elected representatives to reflect the community it serves, which means ensuring those from a migrant background are supported to register, vote and run. This programme saw the Immigrant Council match participants with local councillors from 5 constituencies in Wicklow, Dundalk, Cork, Longford and Swords.

Wicklow Independent Councillor, Joe Behan said “It is essential for people who are coming to the country from other parts of the world to be involved in every aspect of Irish life, including the democratic aspect which is political.” Anne Waithira, who interned with Cllr. Joe Behan, agreed. She said, “The minority are no longer the few. We have become way too many and we need to get things done.” They both enjoyed working together and are looking forward to the upcoming 2019 local elections where they will be seeking election to Wicklow County Council.

The interns in the scheme were asked to keep a weekly written journal of their experiences and participate in review exercises. The Immigrant Council worked with both the interns and the Councillors to help publicise the scheme with the view to encouraging migrants to engage more with their local political system. A number of videos have been produced and can be accessed here and through the Immigrant Council’s YouTube Channel. The Immigrant Council will continue to work with Councillors and the interns to publicise and promote the programme and crucially, the key message to encourage more people from migrant background register, vote and run in local elections. Increased diversity among voters and representatives will build political systems which better serve communities, building stronger societies for everyone.

Through her participation in the scheme, Fahmeda Naheem, from Cork, met people of various backgrounds. She said, “It was very interesting when I went to the meetings and saw people from my local area discussing different issues they were facing… so it really shows that local politics revolves around an individual.” Adam Muchegwa from Dundalk said attending Council meetings gave him a deeper understanding of the local politics. “I know exactly what is happening in this Council which is something I never used to know so the benefit is that I have got involved in the local democracy.”

It is evident that the interns learned a lot from the Councillors. The scheme was jam-packed with activities from council meetings to canvasing in the local areas. Yulia Ghumman, who interned with Councillor Duncan Smith of Swords- Fingal Council, said she did not know that Councillors worked that hard and that they do not receive any administrative support and all costs to the job are borne by themselves. On a lighter note, she said “the canvassing alerted me to the different door designs including ones with letterboxes down below, you have to kneel to stash the information leaflets.”

Although the scheme is winding up, the Immigrant Council hopes looking into the future Councillors and their political affiliations will support and promote migrant participation and representation in local politics. The evidence from this scheme is clear: supporting migrants’ participation in local politics has benefits for everyone involved. Councillor Anne Campbell said, “This internship has been unforgettable, it has been life changing and game changing for me and it’s something I would recommend.”