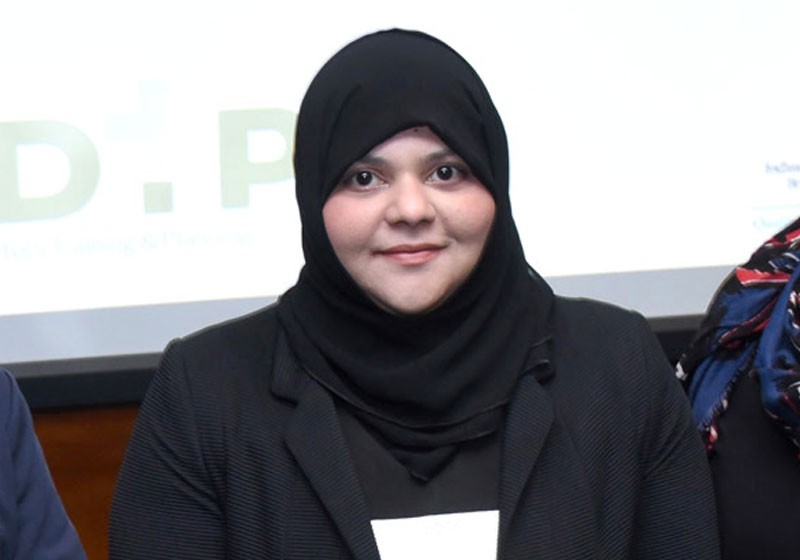 “Be prepared to work 10 times harder if you are from a minority group to achieve what your Irish colleagues would achieve without a problem. You should have a thick skin, a positive mindset and a strong faith to survive in Ireland. It’s a must to have a good support network of all the right and genuine people around who will guide you and support you in the time of need.”

Syeda is one of the fantastic participants in our Migrant Leadership Academy, an Immigrant Council initiative that brings together migrants with an interest in activism and community organising to learn the skills to bring about positive change around them.

A qualified dentist from Pakistan and graduate doctor from Ireland, Syeda completed her dental postgraduation following Masters in Oral and Maxillofacial Surgery from University college London and obtained membership from the Royal College of Surgeons England and Edinburgh.

Syeda moved to Ireland in 2015 from the UK, for the completion of her Fellowship at RCSI and further to complete her medicine studies. She has been working in healthcare for several years and was appointed as Lead for Surgical Specialities in Galway during her time as Registrar in 2016-2017.

Through her work in healthcare in Ireland, Syeda has seen the impact that a lack of diversity and representation has on doctors from minority groups, as well as the challenges faced by non-Irish medical professionals trying to build careers for themselves here in Ireland. Structural barriers to training, internships and appointments make it hard for doctors qualified outside Ireland to access the career development opportunities needed to progress on an equal basis.

“I have realised there were a lot of issues that weren’t addressed due to lack of representation and an adequate platform for the minority doctors and health care professionals working on the frontline."

“Even though these doctors are highly qualified with 10-15 years of experience under their belt, yet they haven’t been able to access equal training opportunities to progress in their respective specialities. The system is not designed to provide career pathways for migrant medical staff, who have been considered temporary in the system. Many have left Ireland to progress further in their careers rather than staying here, and that has meant Ireland has lost valuable talented staff who know the system and their patients.

"It is also difficult to raise this issue, because there are no pathways to redress, and there is a risk that you become an outsider by complaining about it. The insecurity of temporary job contracts, lack of progression and opportunities makes migrant medical staff vulnerable in many ways.”

Syeda was eager to take part in the Leadership Academy to change this, by becoming a positive force in her community and with her peers in the healthcare sector.

“In Ireland, approximately 50% of health care professionals belong to minority groups, yet they don’t have a representation or a platform to raise their issues and voice their valid concerns without a fear of being penalised for standing up for themselves. This work environment, which undervalues people with skills and experience comes to affect one’s mental and physical health."

“I want to help people to find the peace of mind they deserve regardless of their background for them to feel heard, accepted, included and respected.

“I want to draw higher authorities’ attention towards the issues that are holding migrant and minority health care professionals from progressing further in their respective specialities. Their dedication and commitment is not recognised and rewarded appropriately because of these barriers.”

Though having experienced those barriers herself as well as racism more broadly, Syeda still feels Ireland is a beautiful country where most people are very considerate and friendly. In Ireland, I have met genuine, sincere and supportive Irish colleagues and friends who I have known for years now. It’s not an overly exaggerated statement if I say, “they were my rock support in the time of need” for which I can’t thank them enough.

"It’s not the country or the people but the system that requires an immediate change and need a fair representation from the minority groups working in health care sector in order to resolve the issues that is affecting their wellbeing and career pathways. Surprisingly people are aware of the issue of racism and discrimination that exist in the country and even try to empathise with those experiencing racism but are unfortunately unaware how to offer help to change the mindset of those who discriminate.

Syeda says she has gained so much confidence since starting the Leadership Academy:

“Every session reinforces me to work towards the issues I have witnessed in health care setting here in Ireland, I personally feel lack of representation professionally as well as academically has impacted non Irish  health care professional’s progression as well as the chance to be treated equally which should be taken seriously now. I strongly hope to support all my colleagues as I always have, regardless of their race, colour, religion, gender, origin, age, or disability, who has been subjected to unfair behaviour or been marginalized whether they are Irish or non-Irish. I have treated everyone with equal respect throughout  these years, people who know me well can vouch for this as I don’t believe in racism or discrimination but diversity, equality and inclusion and strongly hope for minorities to be treated the same."

A huge thank you to Syeda for sharing her amazing story with us, and best of luck in becoming that positive force for change!