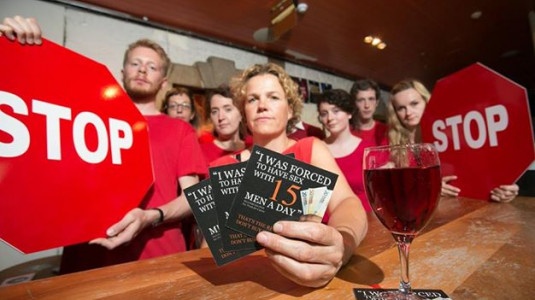 Transnational initiative focusing on the prevention of human trafficking by reducing the demand for exploitation of female victims of trafficking through prostitution.

STOP Traffick! Tackling Demand for Sexual Services of Trafficked women and Girls was a EU-funded transnational project led by the Immigrant Council of Ireland from 2012-2014. It focused on the prevention of human trafficking by reduction in demand that fosters the exploitation of female victims of trafficking through prostitution.

This project explored different attitudes of buyers and potential buyers to human trafficking, in order to inform demand reduction awareness raising initiatives, implemented through a partnership of civil society, public and private enterprises. The project also targeted employers to pilot the demand reduction strategy as part of their corporate responsibility. It developed a toolkit of products and activities to raise awareness among buyers and potential buyers of services delivered by human trafficking victims in the sex industry, in order to reduce demand for purchase of sexual services.

The research into buyers of sex was based on mixed research methodologies. The data collection combined quantitative and qualitative methods. In total 763 buyers of sex participated in either in-depth interviews or an online survey in the five countries (71 face-to-face interviews in two countries and 692 qualified online survey responses out of a total of 2,004 responses received in the rest of the countries). A Research Ethics Framework was drawn up to protect the anonymity of interviewees and to ensure that no safety or security risks existed for interviewers or respondents.

The main findings are as follows:

The notable products developed by this project include:

With the financial support of the Prevention of and Fight against Crime Programme European Commission – Directorate-General Home Affairs.