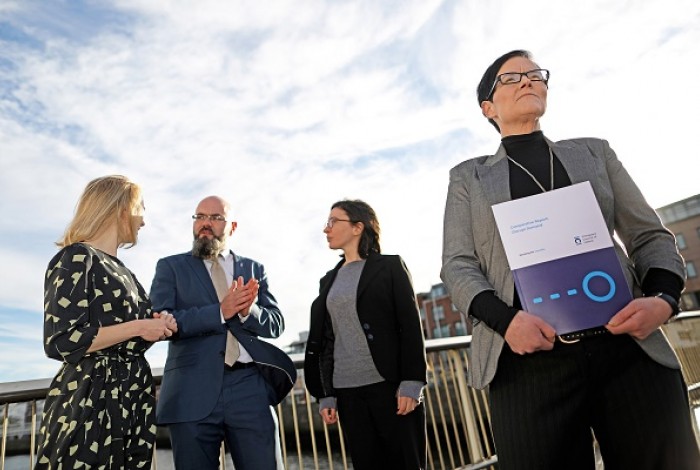 A new report published today (13.11.18) examining legislative approaches to prostitution and human trafficking in six EU member states, including Ireland, has found criminalising the purchase of sex, while decriminalising those in prostitution, is the best way to end demand and effectively tackle trafficking. The Immigrant Council of Ireland partnered with agencies in Cyprus, Finland, France, Lithuania and Sweden for the two-year European Union funded project, Disrupt Demand. Today’s report marks the culmination of the project and unites findings from each country, where there are different approaches to prostitution and trafficking.

However it is clear laws targeting demand will not be effective unless they are supported by clear, policy led efforts to properly support women and girls exiting the world of sexual exploitation.

Monica O’Connor, co-founder of SERP (Sexual Exploitation Research Project UCD) and author of the report, said, “In Sweden, and now in France and Ireland, the laws flow from the understanding of prostitution as a form of violence against women. This means the demand to buy girls or women to supply sexual acts is not regarded as legitimate or acceptable within society and, therefore, the purchase of sex is a criminal offence, while those being exploited are decriminalised.

“The Swedish approach, which we welcomed into Ireland when the Criminal Law (Sexual Offences) Act 2017 was passed, is underpinned by principles of gender equality, and has, crucially, also proven to be an effective anti-trafficking and demand reduction measure.

“However we have seen by the examples in Sweden, which has had similar laws in place since 1999, and France, which introduce legislation in 2016, that positive outcomes for women in prostitution and for society require the state to provide adequate resources ensuring the law is fully embedded and that there is a robust statutory or policy basis for service provision and exit routes. We look forward to continuing to work with An Garda Síochána and the Department of Justice to ensure both the spirit and letter of the law is implemented.”

Brian Killoran, CEO of the Immigrant Council of Ireland, said, “What is clear and has emerged from the two-year project is the crucial importance of using the law to develop a collective societal acceptance that we will not stand for the sexual exploitation of women and girls.

“What the report further shows is that in countries with different legal frameworks, like Cyprus and Lithuania, migrant women, who in many countries, Ireland included, constitute the majority of those being exploited in the sex trade, have less protections and support and are therefore placed in a more vulnerable position.

“One clear way to achieve the improvements identified in the report would be to install an independent national rapporteur on human trafficking. We’re delighted to welcome the Finnish National Rapporteur on Trafficking in Human Beings, whose ongoing work shows just how effective this position can be to analyse the effectiveness of the investments in protecting the victims and informing future efforts.”

Mia de Faoite, activist and survivor, said, “This comparative report is most welcome, once again highlighting that targeting the demand through criminalising those who purchase human beings is the most effective way to reduce trafficking of women and girls into prostitution. A law aimed at buyers works because it puts them at risk of bringing what they do in the dark, into who they are in the day, and that is a risk many will not take.

“We are dealing with criminal gangs who will try to find a way around the law. European nations must continue to collaborate together and learn from each other because if we do not put our minds together then the criminal minds will always have the upper hand.

“I fully support the call for Ireland to appoint an Independent National Rapporteur on Trafficking in Human Beings; in fact I believe it is vital that we do so. An Garda Síochána now have a valuable legal tool but they must be supported and given the resources in order for it to be most effective and Ireland must live up to its legal positive obligations in relation to protecting and supporting the victims of this heinous crime.

“Ireland is on the right side of history; a philosophical shift in our nation has begun which will create a more equal and humane society in which prostitution has no place.”

Our partner agencies were

The Disrupt Demand Comparative Report and Executive Summary are being launched at a conference being held in the Morrison Hotel, Dublin 1, today.