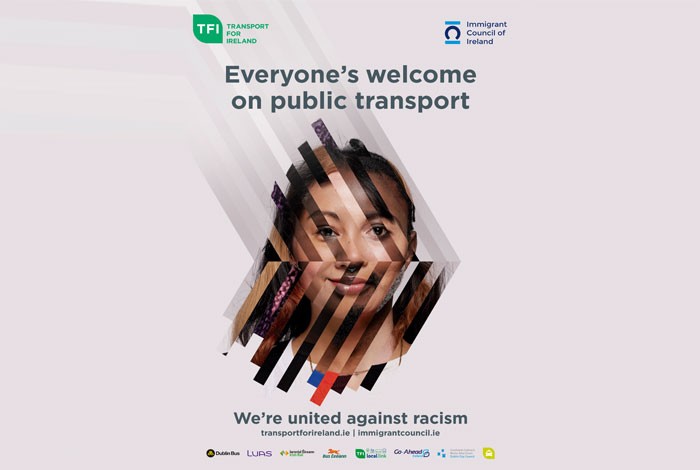 The campaign is funded by TFI and delivered in partnership with ICI, along with Dublin Bus, Bus Éireann, Iarnród Éireann, TFI Local Link, Luas, Go-Ahead Ireland and Dublin City Council.

This is the eighth year an anti-racism campaign has been run. The creative used in the campaign features a face created by combining a diverse range of ethnicities.

This year, TFI and ICI have asked ‘Humans of Dublin’ to spotlight people of diverse backgrounds who are active in promoting inclusivity within Ireland. Five participants have been chosen and photographed by Humans of Dublin in a public transport environment. Their portraits and stories will be posted on the Humans of Dublin Instagram account during the course of the campaign.

“Racism has no place on public transport, or anywhere else in Irish life. Everyone should feel safe and respected while travelling and working on any part of our transport system, particularly the staff who have kept services running throughout the pandemic.

"I’d like to thank the NTA, transport operators and the Immigrant Council of Ireland for their continued work on combating racism. This campaign is about celebrating the growing diversity within Ireland’s public transport services and ensuring people of all backgrounds are treated with the respect they deserve.

“Transport for Ireland is proud to be working with the Immigrant Council of Ireland in rolling out this important campaign. The key message is that everyone is welcome on public transport and that we are united against racism.

"I would encourage commuters to show their support by sharing this message and artwork on social.”

“This year has seen a global and local conversation ignite around the issue of racism and discrimination as experienced by too many within our communities. We have seen the damage it can cause, and the isolation it invokes.

“Racism left unchallenged damages society for everyone, not just victims, and the only way to overcome it is by joining forces to say we will not tolerate it. Indeed, one of the most positive things we can take from the global conversation concerning racism this year is the solidarity shown by so many to those who have experienced horrific abuse.

“This joint campaign with Transport for Ireland, transport operators and Dublin City Council, now in its 8th year, is a great example of people coming together to say there is no room for racism – on public transport or within society at large. We commend our partners for the leadership they continue to show, which has never been more important.”

Learn more about the Immigrant Council's anti-racism work and visit our Be an Ally Against Racism section for tips and advice on what to do if you find yourself experiencing or witnessing racism.