Undocumented Regularisation Scheme to be profoundly transformative for thousands of migrants 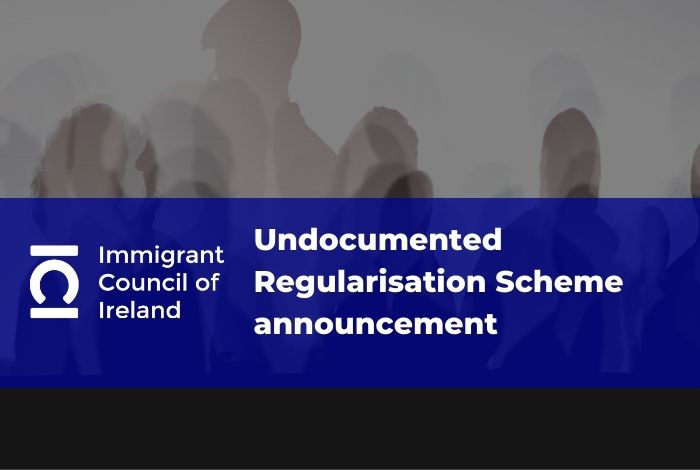 Long-term undocumented migrants may struggle to pay the high application fees that will be part of the State’s forthcoming Regularisation Scheme which will launch in Q1 2022. That’s according to the Immigrant Council of Ireland and other civil society groups working to advance migrant rights in Ireland who today (3.12.2021) reacted to the announcement by the Department of Justice at a press conference in Dublin this morning.

The scheme proposes to regularise the immigration statuses of Individuals living in Ireland undocumented for at least 4 years by the time the scheme opens in 2022. Individuals with dependent children may apply after 3 years of being undocumented in the State.

Applications for the scheme will come at a cost of €550 for each individual and €700 for family units. There were will be no financial assistance provided or hardship exemptions of the application fee for eligible undocumented migrants. Application fees will however be waived for eligible international protection applicants.

“We welcome the long-awaited introduction of this scheme and congratulate those who have campaigned for many years to see this day come to pass. We would also like to pay special tribute to the Justice for the Undocumented campaign for their tireless work on the issue for several years. Like many of our colleagues in civil society, we have been calling on the Government to introduce such a scheme for many years, reflecting the ongoing increase in queries to our Helpline and legal services from undocumented migrants looking for immigration advice. The scheme will be profoundly transformative to the lives of thousands of individuals and families, including children born here in Ireland who have never known any other home.

“While we are delighted at the inclusive nature of the scheme including individuals two or more years in the International Protection Process as well as those already in the deportation process, there are challenges we feel should be addressed. These include the particularly high (and potentially prohibitive) application fees for the scheme for undocumented individuals and families, given the vulnerability of many migrants in these groups and that additional immigration registration fees will be required upon approval for successful applicants. Many of the potential applicants of the scheme may struggle with the cost of the fees given the shadow nature of their employment conditions and we are disappointed in the State’s omission of any financial hardship exemptions for the application costs.

“We also urge the Department of Justice to address any anomalies arising from the scheme in a fair and consistent manner across the whole immigration system, for example for other long-term undocumented persons who have recently applied for residence prior to the scheme and received positive but less favourable immigration permissions (for example pre-scheme undocumented migrants receiving a limited Stamp 1 instead of the robust Stamp 4 permissions that will accompany positive decisions through the new scheme).

“We welcome the scheme being open for six months and recognise the challenge in communicating the scheme to hard-to-reach migrant populations across Ireland who may be eligible, as well as the challenges in preparing the relevant documents for the application. Communicating the details of the scheme in different languages is essential and we urge the State to consider this in their approach, as well as the proper user testing of the proposed online application system which will be the only means for individuals and families to apply.

“Civil society groups like the Immigrant Council of Ireland will be instrumental in helping to amplify awareness of the scheme and ensuring as many eligible individuals as possible partake. As an independent organisation that relies on public donations to reach migrant audiences, we will be asking for support from the public in order to communicate the scheme to hard-to-reach migrant communities and to support applicants through the process.”

The Undocumented Regularisation Scheme will commence in early 2022 and be open for six months. During this time the Immigrant Council of Ireland will be providing information and advice to migrants through its Helpline (01-674-0200 Mon/Tues/Thurs/Fri 10am-1pm) and website. Donations can be made to support migrant outreach at www.immigrantcouncil.ie/donate.